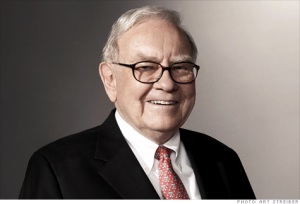 Warren Buffett has increasingly made headlines over the past few months based on his claim that he pays a lower tax rate than his maid.  Why is this so significant?  It’s because Buffett happens to be listed by Forbes as the 2nd  Richest American, only bested by Microsoft founder Bill Gates.  Forbes lists Buffett’s net worth at an estimated 39 Billion dollars, which is no small pocket change.  So just how did he get there?

Buffett was born in 1930 in Omaha, Nebraska to U.S. Representative Howard Buffett.   He attended Wharton Business School for two years before he transferred to the University of Nebraska-Lincoln and graduated at 19 with a B.S. in Business Administration.  After undergrad he attended the Columbia Business School.  Between 1951 and 1969 he held such positions as an investment salesmen, securities analyst, and general partner.  In 1970 he became Chairmen, CEO of Berkshire Hathaway, Inc., and from there, the rest is history.  Buffett became a millionaire in 1962 and reached billionaire status in 1990.

In addition to his vast wealth, Buffett is also known for his philanthropy.  Buffett has vowed to give most of his money away to charity after his death.

For those interested in finding out more about Warren Buffett, check out the following websites and books: