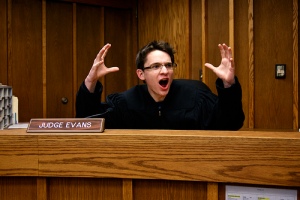 After the monotonous reading of dry opinion after dry opinion in your casebooks, most would think that judges have no sense of humor. Yet, this isn’t the case! Judges are human beings like you and me, after all. Take a look at some of the humorous ways judges have kept things a little more light hearted than the personal and subject-matter jurisdiction cases we all had to read as 1Ls.

United States v. Batson, GOLDBERG, Circuit Judge:
Some farmers from Gaines had a plan.
It amounted to quite a big scam.
But the payments for cotton
began to smell rotten.
Twas a mugging of poor Uncle Sam.
The ASCS and its crew
uncovered this fraudulent stew.
After quite a few hearings,
the end is now nearing-
It awaits our judicial review.
782 F.2d 1307, 1309 (5th Cir. 1986)

In re Love, A. JAY CRISTOL, Bankruptcy Judge:
Once upon a midnight dreary, while I pondered weak and weary
Over many quaint and curious files of chapter seven lore
While I nodded nearly napping, suddenly there came a tapping
As of some one gently rapping, rapping at my chamber door,
“Tis some debtor” I muttered, “tapping at my chamber door—
Only this and nothing more.”

Ah distinctly I recall, it was in the early fall
And the file still was small
The Code provided I could use it
If someone tried to substantially abuse it
No party asked that it be heard.
“Sua sponte” whispered a small black bird.

The bird himself, my only maven, strongly looked to be a raven.
Upon the words the bird had uttered
I gazed at all the files cluttered
“Sua sponte,” I recall, had no meaning; none at all.

And the cluttered files sprawl, drove a thought into my brain.
Eagerly I wished the morrow—vainly I had sought to borrow
From BAFJA, surcease of sorrow—
and an order quick and plain
That this case would not remain
as a source of further pain.
The procedure, it seemed plain.
As the case grew older, I perceived I must be bolder.
And must sua sponte act, to determine every fact,

If primarily consumer debts, are faced,
Perhaps this case is wrongly placed.
This is a thought that I must face, perhaps
I should dismiss this case.

I moved sua sponte to dismiss it
for I knew I would not miss it
The Code said I could, I knew it.
But not exactly how to do it, or perhaps some day I’d rue it.

I leaped up and struck my gavel.
For the mystery to unravel
Could I? Should I? Sua sponte, grant my motion to dismiss?

While it seemed the thing to do, suddenly I thought of this.
Looking, looking towards the future and to what there was to see
If my motion, it was granted and an appeal came to be,
Who would be the appellee?
Surely, it would not be me.

Who would file, but pray tell me,
a learned brief for the appellee
The District Judge would not do so
At least this much I do know.
Tell me raven, how to go.

As I with the ruling wrestled
In the statute I saw nestled
A presumption with a flavor clearly in the debtor’s favor.
No evidence had I taken
Sua sponte appeared foresaken.

Fisher v. Lowe, J.H. GILLIS, Judge:
We thought that we would never see
A suit to compensate a tree.
A suit whose claim in tort is prest
Upon a mangled tree’s behest;
A tree whose battered trunk was prest
Against a Chevy’s crumpled crest;
A tree that faces each new day
With bark and limb in disarray;
A tree that may forever bear
A lasting need for tender care.
Flora lovers though we three,
We must uphold the court’s decree.
Affirmed.
122 Mich. App. 418, 333 N.W.2d 67 (1983)

Avista Mgmt. v. Wausau Underwriters Ins. Co., GREGORY A. PRESNELL, Judge:
-Instead, the Court will fashion a new form of alternative dispute resolution, to wit: at 4:00 P.M. on Friday, June 30, 2006, counsel shall convene at a neutral site agreeable to both parties. If counsel cannot agree on a neutral site, they shall meet on the front steps of the Sam M. Gibbons U.S. Courthouse, 801 North Florida Ave., Tampa, Florida 33602. Each lawyer shall be entitled to be accompanied by one paralegal who shall act as an attendant and witness. At that time and location, counsel shall engage in one (1) game of “rock, paper, scissors.” The winner of this engagement shall be entitled to select the location for the 30(b)(6)deposition
2006 U.S. Dist. LEXIS 38526 (M.D. Fla. 2006)

And apparently Chief Justice Roberts pretends to be a novel writer sometimes:

Devlin spotted him: a lone man on the corner. Another approached. Quick exchange of words. Cash handed over; small objects handed back. Each man then quickly on his own way. Devlin knew the guy wasn’t buying bus tokens. He radioed a description and Officer Stein picked up the buyer. Sure enough: three bags of crack in the guy’s pocket. Head downtown and book him. Just another day at the office.
555 U.S. 964, 129 S. Ct. 448, 172 L. Ed. 2d 321 (2008)

So next time enter a courtroom shaking with fear, remember those intimidating figures with the long black robes on are actually people too. Even the Supreme Ones.