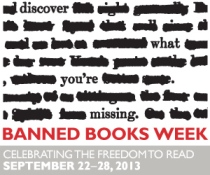 Banned Books Week by ALA

September 22-28, 2013 is the 30th anniversary of Banned Books Week. Banned Books Week celebrates the freedom to read by highlighting attempts to suppress books.  In recognition of this anniversary, the American Libraries Association has put together a timeline of books either banned or challenged during the 30 years that Banned Books Week has been celebrated. Among the books on the timeline is that classic of legal literature, To Kill a Mockingbird, which has been repeatedly challenged for language and racial themes.

From the legal side of things, the decision to remove a book from a school library is generally made by the local school board and can be appealed in court. If you want to find cases dealing with the banning of books, we suggest you check out cases assigned the topic and key number Constitutional Law 1983. You may also want to check out Girls Lean Back Everywhere, a classic book on the law of censorship.