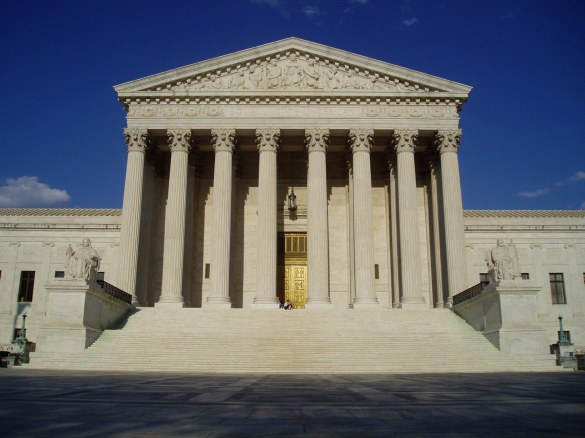 Lawyers and law students stand in awe of the Supreme Court of the United States. We reverently refer to it as “the Court”. We pick and choose the justices we like and agree with. We read the cases and treat the rulings as powerful and definitive. We argue over the Court’s role in our democracy but even during our debates we cannot overstate its importance to our society. The power of judicial review makes the Court the ultimate authority on saying what the law is. The Court is the nation’s heart of judicial power and such a powerful institution doesn’t come without its fair share of fascinating history. 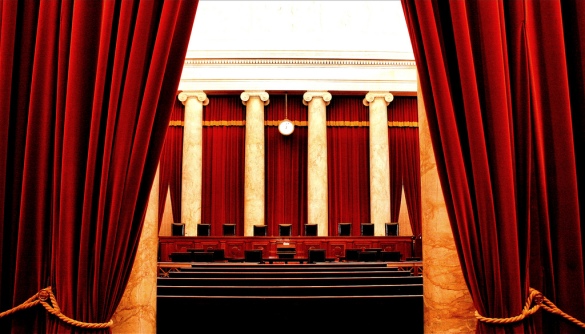 The courtroom. Featuring the pillars made of Sienna marble. Image by Flickr user Phil Roeder.

Take the building the Court meets in, for example. Surprisingly, it’s relatively new – the Court didn’t get its own building until 1935 after existing for 146 years. At the very beginning, the National Capital was located in New York and the Court met at the Merchants Exchange Building. The Capital then moved to Philadelphia in 1790. There, the Court convened first in the State House (Independence Hall) and then in City Hall. Ten years later, the Capital moved again, this time to its permanent home in Washington, D.C. and the Court had no building of its own in which to convene. Congress thus offered the Court space in the Capitol Building. This started a period during which the Court would move several times around the Capitol Building. This ended when the British set fire to the Capitol in the War of 1812 and the Court was forced to meet in a private home until 1819. Once the Capitol was restored, the Court moved back in and met in a chamber now known as the “Old Supreme Court Chamber” until 1860. Then, the Court relocated to what is now known as the “Old Senate Chamber” until it finally moved into its own building in 1935.

The new building’s chief proponent was Chief Justice William Howard Taft (yes, that William Howard Taft – President Harding appointed him to the bench eight years after Taft finished his term as the 27th U.S. President). Taft convinced Congress to stop housing the Court in the Capitol Building and give it its own place. To that end, Cass Gilbert was chosen as the lead architect. Tragically, neither Gilbert nor Taft would live to see the building completed and the construction of their vision was finished under the direction of their successors. On October 13, 1932, Chief Justice Charles Evans Hughes spoke as the cornerstone was laid. His words were “the Republic endures and this is the symbol of its faith.”

Construction was complete in 1935 and the Court held its first session there on October 7 of that very year. The building incorporates several different types of marble. The main facade is made of Vermont marble while the inner courtyards consist of Georgia marble. The marble for the main courtroom’s 24 columns comes from Sienna, Italy – as per Gilbert’s exact directions. The building currently houses the Great Hall, the courtroom, the reading rooms and chambers of the justices, an exhibition hall, a gym, a basketball court (aptly named the Highest Court in the Land) and much more.

Not everyone was thrilled with the opulence of the structure. Associate Justice Harlan Fiske Stone called it “almost bombastically pretentious…wholly inappropriate for a quiet group of old boys such as the Supreme Court.” Another justice supposedly said the justices would be “nine black beetles in the Temple of Karnak.” Yet another justice humorously suggested that they should ride into the building on elephants. Remarkably, the opulent building came in $94,000 under budget, costing around $9.6 million in 1935 terms ($169.5 million in modern terms).

Concerns over the building’s extravagance aside, the Court finally had a home of its own – a place not only for the justices to decide cases, but a building symbolic of the judicial authority of the U.S.