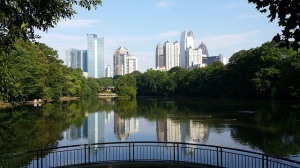 Springtime in Atlanta! One of the most beautiful times of year in the city is marked with not only a re-blossoming of flowers and return of color but also a vast array of events, festivals, shows etc. From the time-honored traditional festivals and sites to the newer up-and-coming, there is something for everyone to do.  While this is definitely not a full list, here are just a few things to get you started as you look for ways to enjoy the warmer weather and take some time away from work and studies. Go with a group of friends, your kids, family, or even by yourself to enjoy all of Atlanta’s finest food, music, culture, artists, and exhibits while also getting to spend time outside in the warm spring weather.

“The Atlanta Film Festival, now in its fourth decade, is one of the region’s largest and longest-running preeminent celebrations of cinema in the Southeastern United States and one of only a handful of Academy Award® qualifying festivals in the country. More than 25,000 festival attendees enjoy independent, animated, documentary, and short films each year.”

Attendees can immerse themselves in the Atlanta Film Festival experience through Festival Genius, which allows participants to watch movie trailers, schedule screenings on the their personal film festival calendar and rate them after they have been viewed.

In addition to top notch independent films from around the globe, movie enthusiasts can mix and mingle with filmmakers and industry professionals during a variety of Atlanta Film Festival events including awards ceremonies and workshops. Past honorees of the IMAGE Film Award Gala include Cicely Tyson, Spike Lee, Burt Reynolds, Ozzie Davis and Ruby Dee. 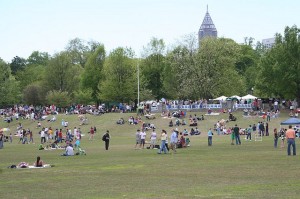 “Originating from a showcase of blooming trees and accomplished artists, the Dogwood Festival has evolved into one of the largest events in the Southeast. You’ll find the country’s best painters, sculptors, photographers, jewelry makers and glass blowers, as well as live performance art exhibitions, interactive music workshops and a food.”

The Atlanta Dogwood Festival is Atlanta’s annual celebration of the blooming of its native dogwood trees. For more than 75 years, the Dogwood arts festival has filled Midtown Atlanta’s Piedmont Park with live music, arts and crafts, food booths and family-friendly activities. In 2012, the Atlanta Dogwood Festival was ranked No. 35 in the Sunshine Artist Magazine Best 200 fine arts festivals in the United States.”

A juried art competition recognizes artistic achievement in such categories as sculpture, painting, jewelry and photography. The Kid’s Village features arts and crafts, face painting, rock climbing and huge inflatables that are sure to please kids of all ages.

Another highlight of the Atlanta Dogwood Festival is the U.S. Disc Dog Southern Nationals, a world-class competition starring the top Frisbee dogs in the nation. Musical entertainment at the Dogwood arts festival ranges from bluegrass and country to rock and soul. Food options include funnel cakes, kettle corn, gyros and more.”

“Think local on the last Saturday in April when the soft spring air blows in tasty good times at Taste of East Point. The event showcases the food, art and music created in the south metro area. Patrons arrive hungry to nosh at tents hosted by area restaurants, local artists show off their handmade wares and a host of singer-songwriters perform a mix of funk, soul, blues, dance tunes and folk.

Each year downtown East Point comes alive for one of the most premiere cultural events in Georgia – the Taste of East Point and the South Metro Area. Hosted the last Saturday in April, this event is a leisurely stroll past local art displays and talented musicians, while partaking in an array of wine and food “tastes”.

Taste selections from area restaurants that take pride in their annual display. View the work of artists that live and work in the East Point, Hapeville and College Park area. Find paintings, prints, handmade jewelry and more! Kick back and relax to the sounds of bands from the Tri-City area. From rockin’ blues to high energy funk, there is something for everyone!

“THE ATLANTA JAZZ FESTIVAL is regarded as one of the country’s largest FREE jazz festivals. It is an annual musical showcase that celebrates jazz legends and up-and-coming jazz greats in venues throughout metropolitan Atlanta during the entire month of May. The festival culminates each Memorial Day weekend with show-stopping performances at Piedmont Park.”

“Celebrating more than 35 years of soulful expression, the Atlanta Jazz Festival is the perfect way to start your Memorial Day weekend. Explore Piedmont Park and visit vendors displaying some of the city’s finest arts and crafts, food and drink and merchandise.”

“An annual tradition, the Decatur Arts Festival celebrates culture, community and creativity with a weekend exploding with artistic expressions. The weekend starts with the ArtWalk, a leisurely stroll through the city as local shops host free receptions for new art shows. Throughout the day you’ll find music, performance art, dancing and special events just for kids and teens.” 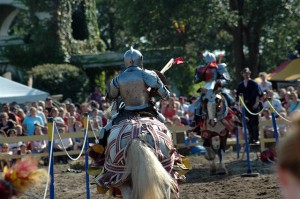 “Join hundreds of colorfully-clad characters for a medieval European Country Faire. Stroll through the multi-acre kingdom while feasting on hearty food and drink, shop for hand-crafted treasures and become mesmerized by artisans at work. Ten stages of music and comedy keep you enticed well into the night, while performing animals and games ensure fun for the entire family!”

“This exhibit will be a retrospective of the work of Wifredo Lam, featuring more than 40 paintings and drawings and prints as well. Visitors will trace Lam’s career from his time in Madrid and Paris to his return to Cuba. Lam’s work was known to be a strong influence on artistic figures like Picasso, Federico Garcia Lorca and Gabriel Garcia Marquez, among others.”

Visit picturesque Turner Field to enjoy America’s pastime in the heart of downtown! 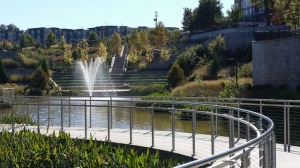 A relatively new but already hugely popular addition to Atlanta, the beltline has several different walking, biking, and running trails fresh for you to explore from the Old 4th Ward to Midtown to the Eastside. While the trails themselves are ever expanding, they already go straight through some of Atlanta’s most interesting and hip neighborhoods (not to mention are right next to many of Atlanta’s newest and most popular restaurants, markets, bakeries, and other eateries).

While you are enjoying the outdoors, don’t forget to visit Stone Mountain for a great workout and equally great view (whether by yourself or with a group). After hiking up and coming back down bring a Frisbee or football to throw around while you wait for the start of the Laser Show. You can set out your blanket in front of the mountain for a picnic as you enjoy some tunes, the lights and some great company.