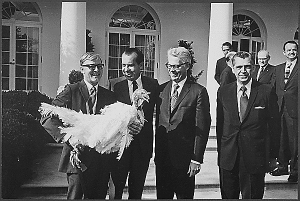 Nixon was one of many presidents to receive a Thanksgiving turkey (image: National Archives)

George Washington issued the first presidential proclamation on Thanksgiving when he declared Nov. 26, 1789 to be a day of “national thanksgiving” in which a new country was invited to acknowledge their “opportunity peaceably to establish a form of government for their safety and happiness”.

Since that first proclamation, Americans have made Thanksgiving one of our most celebrated holidays. Presidents even get in the act by granting a chosen turkey a presidential pardon. Most people think that presidents have been pardoning Thanksgiving turkeys since the 1940s. But while there is ample proof of presidents receiving turkeys, it wasn’t until George H.W. Bush pardoned one in 1989 that the tradition was formalized. (In fact, there is some suspicion Truman and his family ate the turkeys they received.) However the tradition got started, it will continue again this year when President Obama pardons a turkey on Wednesday, Nov. 24. The newly-pardoned turkey will then bring the Thanksgiving tradition full circle by moving to Mount Vernon, George Washington’s home.