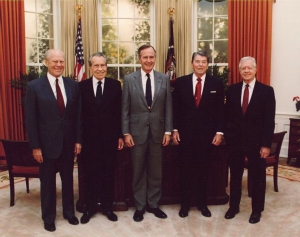 Would you like to see Franklin D. Roosevelt’s New York State Bar Association Application? Or read John F. Kennedy’s national security files from the Cuban Missile Crisis? Or see menus from White House dinners during Bill Clinton’s presidency? Or read about the three-and-a-half tons of Jelly Bellies that were shipped to the White House for Ronald Reagan’s 1981 Inaugural festivities? Or read the condolence mail President George W. Bush received following the September 11, 2001 terrorist attacks? Then explore the Presidential Libraries!

The Office of Presidential Libraries coordinates a nationwide network of thirteen Presidential Libraries, each housing the papers, records, and other historic materials of U.S. Presidents. These libraries are great sources for researchers studying our presidents and our nation’s history. Since President Herbert Hoover, these libraries have been archiving presidential documents, media, and electronic materials to preserve the evidence of the Presidency for future generations.

Presidential libraries are both archives and museums, bringing together documents and artifacts of the President and his administration and displaying them in exhibits to millions of visitors each year. The libraries preserve not only official presidential records and documents, but also personal papers of Presidential family members, associates, and friends and audio and visual collections. If you cannot visit the libraries in person, each Presidential library has an electronic database to make researching more accessible.