This semester I’m going to deviate from the norm of what’s going on in the library and concentrate on the art we display. The abundance of beautiful and vibrant prints is one aspect of the library that I’ve enjoyed since my job interview in 2010. I want to learn a little more about some of these works, and who knows, maybe you do too.

For the first post, I’ve chosen Coming Home from the Mill, 1928 by LS Lowry. Located on the upper level, it’s one that I don’t pass by regularly, but when I do, it always stops me in my tracks. Maybe it’s the arctic temperatures of last week still fresh on my memory, but this painting’s urban bleakness really speaks to me. 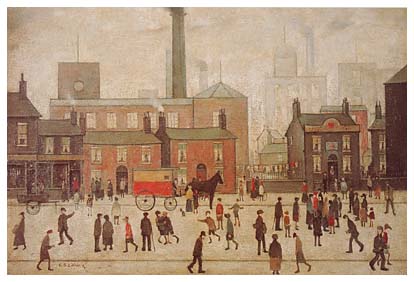 Lowry (1888-1976), who began a more formal art education at 16, was born an only child in Manchester, England where his family lived in the picturesque, Victoria Park suburb. A change in income forced the family to move to Station Road, Pendlebury, where the environment was more industrial and the landscape dominated by factory chimneys. This setting, unappealing to him at first, would later become his focus, or obsession. Lowry recalled, “One day I missed a train from Pendlebury – (a place) I had ignored for seven years – and as I left the station I saw the Acme Spinning Company’s mill … The huge black framework of rows of yellow-lit windows standing up against the sad, damp charged afternoon sky. The mill was turning out… I watched this scene – which I’d looked at many times without seeing – with rapture…” 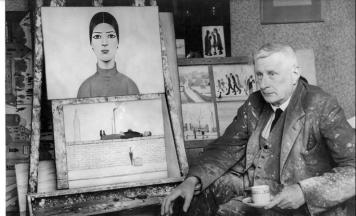 Lowry next to his easel

“I am a simple man, and I use simple materials: ivory, black, vermilion (red), Prussian blue, yellow ochre, flake white and no medium (e.g. linseed oil). That’s all I’ve ever used in my paintings. I like oils… I like a medium you can work into over a period of time”. Looking closely at the surface of Lowry’s paintings shows us the variety of ways he worked the paint with brushes (using both ends), with his fingers and with sticks or a nail.

An interesting aspect of Lowry is that at the age of 16 he left school and began a full time job as a clerk in a chartered accountants firm. He was employed there until his retirement at age 65, unknown to most because of his strong desire to be recognized as a serious artist, a designation not likely given to part-time painters during that era. He was able to keep his artistic and professional lives separate until after his death when it was revealed to the public.

The Salford Museum & Art Gallery began collecting the artist’s work in 1936 and gradually built up the collection which is now housed in The Lowry, a modern arts complex named for the artist and located at the Salford Quays in Manchester. 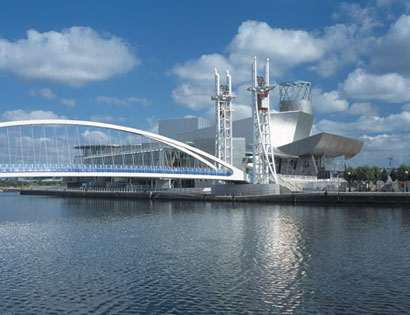 Laurence Stephen Lowry. (2013). In Biography and Links of artnet. Retreived from http://www.artnet.com/artists/laurence+stephen-lowry/biography-links