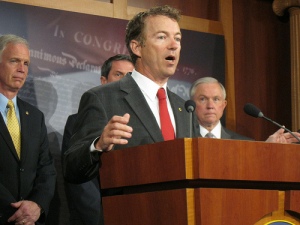 The Speech or Debate Clause, found in Article 1, Section 6, Clause 1 of the United States Constitution, states that members of both houses of Congress will “… in all Cases, except Treason, Felony, and Breach of the Peace, be privileged from Arrest during their attendance at the Session of their Respective Houses, and in going to and from the same; and for any Speech or Debate in either House, they shall not be questioned in any other Place.” Apparently TSA representatives in Nashville missed the memo.

On his way back to Washington, Senator Rand Paul was allegedly detained by TSA authorities. According to multiple sources, the full body scanner went off due to an anomaly found in the Senator’s knee. The freshman senator from Kentucky offered to go back through the scanner but refused to be patted down by TSA employees. He was then escorted by local authorities to an office to be questioned. The TSA has disputed these events qualify as detainment, but the Paul camp, not looking for special treatment as a Congressman, has maintained these types of invasive actions by the TSA happen far too often.

It is awfully ironic, some may say even too coincidental, that within the last year it was the director of the TSA who was being scolded and grilled by Senator Paul. He delivered a biting criticism of the TSA after a six year old girl from Kentucky was patted down by TSA employees. It seems unlikely that his feelings towards the TSA will improve much after his own run in with their procedures.