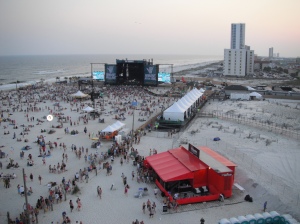 Some of the joys of summer include sitting on the beach, cooking out in the backyard and lounging around the pool.  Aside from a cold beer, the thing that goes along with each of these things is music.  And without fail, every summer brings about the song of the summer that gets played while hanging out with good friends and family and having a good time.

In 2002, Nelly took the summer with Hot in Herrre.   1997 was a little somber when I’ll Be Missing You by Puff Daddy and Faith Evans featuring 112 was played everywhere. (R.I.P. B.I.G.).  And of course the summer of 2012 set the bar pretty high when it seemed everyone was filming their own “Call Me Maybe” video.

As we are about to hit July Fourth weekend and the middle of summer, it’s coming to the point where the song of the Summer of 2013 will emerge.  Check out some of the candidates for 2013’s song of the summer below:

Icona Pop – I Love It

Selena Gomez – Come And Get It